Awaji Island produces around 70% of the Tajima Beef in Hyogo Prefecture and is known for producing famous Kobe Beef brand known all around the country.

The baby cows are born after around 280-290 days after conception, which means that they spend roughly the same amount of time as humans in their mother's body. For 8 to 9 months afterward, they live together on cow-raising farms with their mothers, after which they a bid on and sent to production farms. A production farmer named Yoshiaki Harada told as that from the time the cows are born until they go to the next famer, they are raised with the utmost care and love so that they will grow to be healthy and good children.

The mother cows will birth around 14 to 15 cows in their lifetime. The sperm of Tajima Beef cows is managed at the Agricultural Technology Center in northern Hyogo Prefecture, is used in both planned breeding and along with technologies like fertilized egg transplantation.

Thanks to the efforts of many people involved with Tajima Beef, the DNA of the cows is preserved, giving the cows "a high quality, with dense soft fur, fine bones, a thin hide with elasticity, and an overall well maintained physique.

Tajima Beef cattle are also used nationwide for the improvement of wagyu beef, because of their meat quality and high product yield. Tajima Beef's flavor is also tasty, with a true flavor that is not only from fat, hence its fame nationwide.
Only the elite chosen cows from the already excellent Tajima Beef breed can become Kobe Beef. 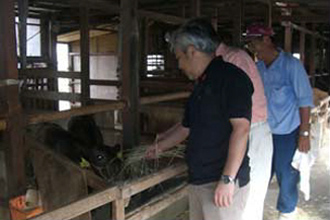 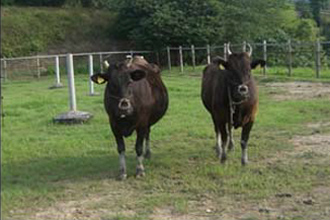