Muzzle pattern is a pattern of cow's nose. It is the one to identify the individual in cow's (Japanese Cattle) world, and the same one doesn't exist as two as well as person's fingerprint.

The leftbottom image is a calf registration certificate.

Muzzle pattern that is surrounded by a large red circle in the lower left. Father and mother are written in this herdbook, and even three generation can be confirmed. 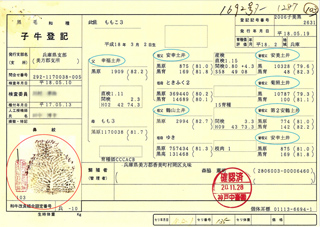