You might be surprised at this unexpected title. In fact, if you travel around ranches in Kobe City or Hyogo Prefecture, or even Japan to seek for cattle named "Kobe Beef Cattle", you'll know it doesn't exist

As a matter of fact, there is a group named Kobe Meat Logistics Promotion consociation which was founded under cooperation of producers/edible meat logistics industry/consumers and the title of the highest-class beef, "Kobe Beef ""Kobe Meat" are given to only those that's cleared the strict definition set by this consociation. 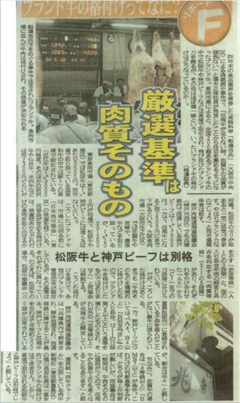 Kobe Beef that we explained about in "Kobe Beef Cattle doesn't exist!?" In fact the history is quite long, it extends back to the period from the end of Edo Period to the very beginning of Meiji Period. 「Kobe Meat Logistics Promotion Consociation 」

According to the official Home Page, on December 7th, Keio 3 (January 1st , 1868), which is 140 years back from now, Kobe became a first trade port in Japan and the opening ceremony was held. In those times, foreigners ate beef in Kobe and the good taste got known well. Since then, the beef has been appreciated as "Kobe Beef" and the name became worldwide. Eventually, what people looked forward to when coming to Japan was said "seeing its scenic lands and eating Kobe Beef". We heard.

Before long, Kobe's beautiful beef came to be introduced as "Kobe Beef" and was catching on as an international brand.

Looking into what happened in Keio 3(1868) further more, the transfer of power back to the Emperor was apparently done in that year. "Kobe Beef " gave its first cry in the very turbulent period. In the end of Edo period, did celebrities, who shined with the Meiji restoration, eat Kobe Beef?

The transfer of power back to the Emperor was a political case in which the 15th Barbarian Subduing Generalissimo of Edo shogunate, Yoshinobu Tokugawa made an offer to transfer the sovereignty back to the imperial court on Nov. 9th, 1868 (Oct.14th ,Keio 3 in old calendar) in the end of Edo period. (quoted from free encyclopedia, "Wikipedia" )

We think now you understand "Kobe Beef Cattle" doesn't mean the cattle bred in Kobe. Then, what is Kobe Beef really like?

"Tajima Beef Cattle have been bred in Tajima Area since ancient times and they are written "suitable for cultivation, towing and food" in continuing series of Japan Chronicles. Before Edo Period, they were used for cultivating fields and transportation. They were actively bred in Tajima Area because of the long life, rebreeding performance and strong fertility and cattle market was begun in the Yabu Marketplace (now in Yabu City) and dealt up to then capital and areas around. Tajima Beef Cattle were in small size, powerful, and good in feedstuff efficiency, so they seemed to be popular.

In Meiji Period, production of crossbreed with foreign breeds such as England growth, shorthorn Devon Breed or Switzerland growth, Brown Swiss Breed for breed improvement, but that caused worsening fleshy substance or lowering labor ability, so crossbreeding was canceled in a short while. In 1898 (Meiji 31), Cattle Registration List, which was like family registry, was applied to administer a bloodline of cattle and such cattle as crossbred with foreign growth were removed since 1911 (Meiji 44). Also, the cattle were never crossbred with other area growth breed varieties so that we could go ahead with the refinement of the bloodline and improvement and the lineage which called "Tsuru" was bred. There are 3 main Tsuru which are Atsuta-Tsuru, Fuki-Tsuru, Yoshi-Tsuru. 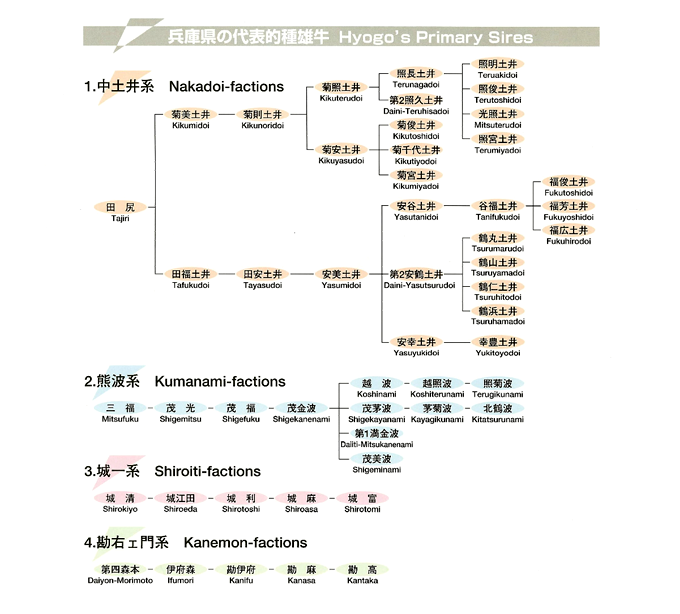 Among this Tajima Beef Cattle, The one

is defined as a Kobe Beef.
In short, only a handful of cattle from among the highest quality Tajima Beef Cattle, which fill the strict conditions, can be called "Kobe Beef". Now you understand the absolute number is small because it's strictly selected.

The table below is called BMS(Beef marbling standard). Beef is ranked in the whole country based on this, the rating is determined by the degree of marbling in beef loin core. This represent only marbling, Fleshy substance or quality of the fat are related to the real taste than marbling.

To be called Kobe beef, BMS value of 6 to 12 are required. It is the lineage of the Tajima cow, and the proof of "the Kobe Beef" gets only a cow bred in Hyogo.